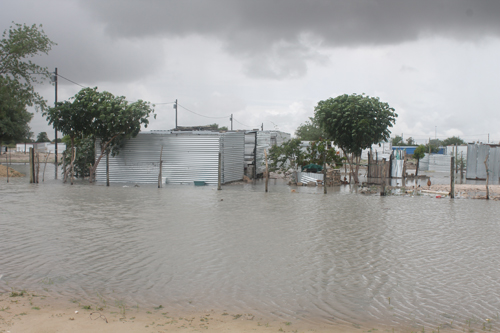 ONGWEDIVA – Senior hydrologist at Cuvelai Etosha Basin in the directorate of water affairs Leonard Hango says flooding is not imminent despite good rainfall received in the northern parts of the country in recent days.
According to Hango, there was no overflow of major rivers yet to trigger flooding. Hango said what is being witnessed in the north is stormwater following good rains in the affected areas.

He said the prediction is that good to above normal rainfall is expected during the current rainy season.
Ruling out the possible flood, for now, Hango said the water in the floodplains is still stagnant.  “We can only experience flooding once our major rivers overflow into our pans – and at the moment, there is no overflow; it is just stormwater,” said Hango.
Stormwater is rainwater that runs off lawns, streets and other land surfaces.

In most cases, it is attributed to failed integrated planning by local authorities where the environmental aspect has been overlooked.
According to Hango, the northern region has received sporadic rainfall, as many parts are still to receive some showers.
He said traditional areas of Uukwaluudhi, Uukolonkadhi, Ongandjera, Ruacana in Omusati region and the Kunene region are still to receive some rain.
“The western side of the Cuvelai system is yet to receive rain,” said Hango, who is also the mayor of Oshakati.
- nashipala@nepc.com.na